This project had been begging for attention for quite a while, especially on the port side, so in 2011 it was time to dive in. With the knowledge gained from Richard Bryer’s excellent article also contained in this section, we began the replacement of our H34’s fixed windows. In our case the plastic frames had become so embrittled that removing them transformed them into little pieces. Attempts in the past to solve leaks with a variety of sealants made them even more difficult to remove. Our design plan was to replace the two fixed windows with a single large piece of acrylic and no fasteners passing through the material. We were hoping for an updated look and a bullet proof installation that would not leak. I attempted to photograph as much of the project as possible, but still managed to miss a few steps. When we proceed to the starboard side, we will try to fill in any gaps and update the posting.

Step 1 was to remove both the exterior and interior plastic frames and windows. The interior frames were in good shape and after a good cleaning would be reused to retain a nicely finished appearance. Lots of sealant remained on the cabin top and required lots of scraping with a putty knife and single edged razor blades. A wipe down with acetone left a fairly clean surface, but more preparation would be required.

Step 2 would involve some repairs required before proceeding to the window installation. There was a slight amount of rot in the plywood core near the aft bottom corner of the aft window. That was hogged out with a chisel back to solid wood. Also, the inner liner was not adhered to the plywood as was the outer skin of the cabin top. This allowed water that leaked in to travel between the layers and come out in various places (the lights, electrical outlets, rear berth, etc.) making it difficult to pinpoint the source of the leaks. After mixing up some West System epoxy with microballons to a peanut butter consistency, the void in the plywood was filled and then sanded flush with the opening. Next, just unfilled epoxy was liberally applied all the way around the window opening between the inner liner and the plywood with a tongue depressor. Make sure all surfaces are protected with masking tape and waxed paper and plastic because this step will drool everywhere. I used every clamp I owned to squeeze the surfaces together and achieve a very tight bond. When this was done, we removed the clamps and sanded the opening smooth. Lastly, all the plywood edges were sealed with a coat of epoxy applied with a small brush to insure it was completely waterproof.

Step 3 was to go back to the outside and prepare the cabin top. The inside of the openings were covered with Press n Seal to keep the debris outside the boat. We finally used the rubber eraser suggested by Steve Dion and completely removed the vinyl stripes. Then we got out the buffer/polisher and completely compounded the cabin top with rubbing compound followed by polishing compound. No wax was applied. This left a chalk free surface ready for the next steps. The surface was wiped with acetone several times.

Step 4 was to hand fit the new acrylic window into its final location and draw a pencil line all the way around the perimeter. But first, I will back up for a moment and cover the details of the new window. We went with ¼” thick smoked acrylic. We added approximately 1” all the way around out from the cutouts in the cabin top. The material was cut to an 8” height, 63” on the bottom edge and 49” on the top. We had them put a polished quarter round all the way around the perimeter. In retrospect I might have only rounded the top and back edges and not made the front so pointed. Otherwise it seemed to be fine. With the pencil line perimeter we then backed up about ½” and drew another line which was masked. Since we didn’t want any of the white cabin top showing through we painted this area black with a one component polyurethane paint.

Step 5, after the paint had dried was to apply a continuous bead of 3/8” diameter butyl bead completely around the perimeter of the opening just above the paint line. Also, two beads of the butyl were placed vertically in the center area between the original two windows. This would act as a barrier for the subsequent structural silicone applied from the inside of the windows. The butyl we used was the black material which was used to set windshields in place on older cars (like my ’69 Mustang). Newer cars use a gasket, but I digress.

Step 6 began with taping some wooden blocks on the outer pencil line as reference points because we figured we had one chance to stick it on in the correct location or it was going to be a giant mess to reposition. The paper on the window was trimmed back an inch on both sides so the butyl would stick to the inside surface and we could see through from the outside. All went well and we set the acrylic on the blocks and guided it down to the sticky butyl. We then pushed it down compressing the butyl from the original 3/8” until it was standing off the cabin top by between 3/16-1/4”. It turns out it was fine and completely adhered. There didn’t appear to be any spring back and the long window followed the curvature of the cabin top. The edges of the window were then masked inside and out.

Step 7 was to create a nicely tooled bead of Dow Corning 795 all the way around the perimeter of the window. It was actually easy to apply with a caulking gun. I was careful to only cut the tip off the tube enough so it would still insert between the cabin top and the acrylic and carefully dispense the silicone filling the gap from the bottom up. I made sure I didn’t over pressure the application in the gap because I didn’t want the acrylic to lift back from the butyl. Even after the silicone, I pushed the window slightly to make sure it was still stuck to the butyl. My gloved finger and a bunch of solvent (mineral spirits, not acetone) soaked paper towels created a nice fillet all the way around. The tape was removed within a few minutes of tooling the silicone so it separated cleanly.

Step 8 attached some stainless steel clips I fashioned in a vise to hold the window after stripping off the protective paper. I did not know if these clips were necessary, but I was afraid the window might fall off. The clips allow for fore and aft expansion. After a full year of exposure to the summer heat and winter cold (I know its California and we don’t have either) there has been no sign of separation and even better…no leaks! I haven’t made any more of the clips. I would probably use a couple of more along the top.

I do like the appearance of the large single window. I think with the flat surface it will be easier to polish out if it gets cloudy down the road. This year I will do the starboard side so both sides match again. The acrylic was $185 and the butyl cost me $10 each for 15 foot rolls. Not bad for just over $200. 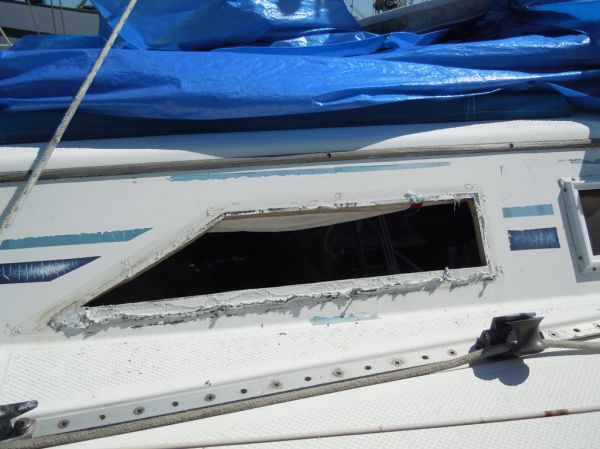 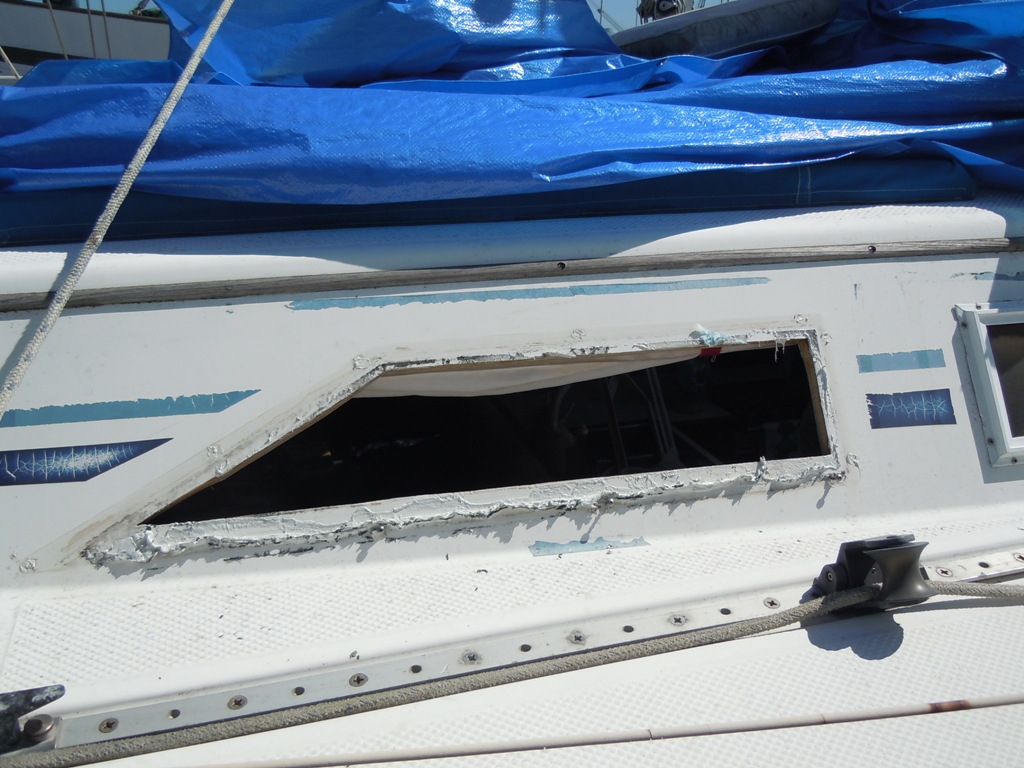 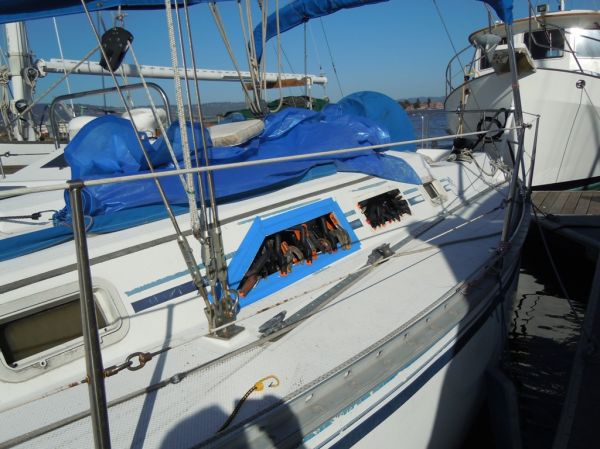 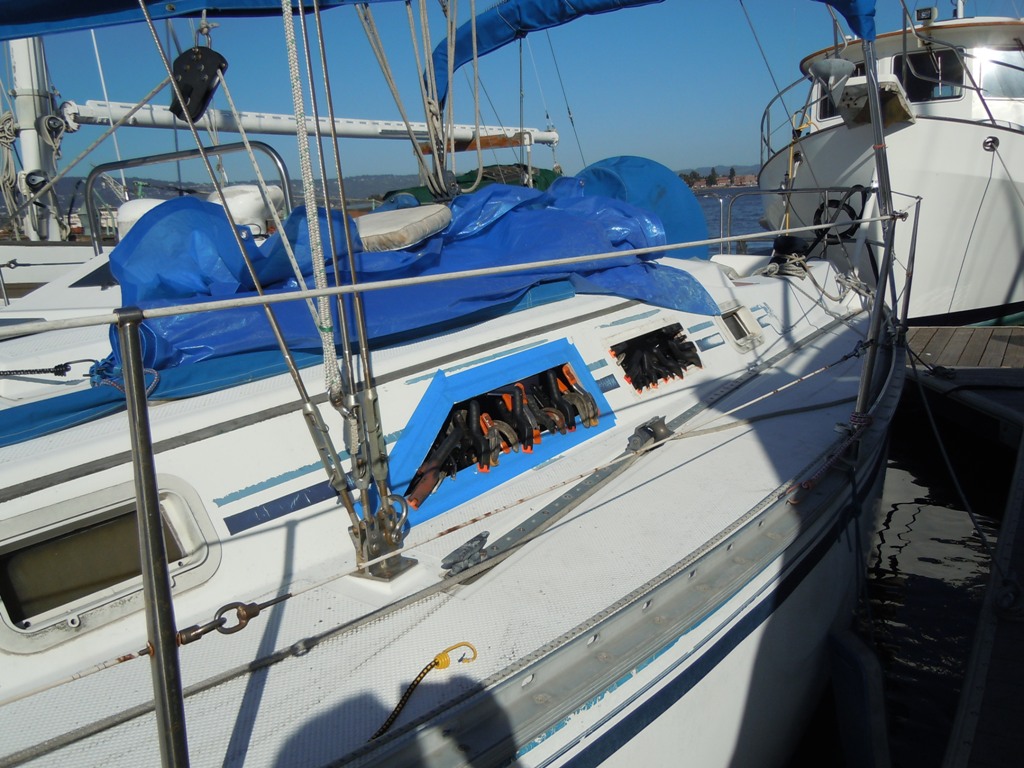 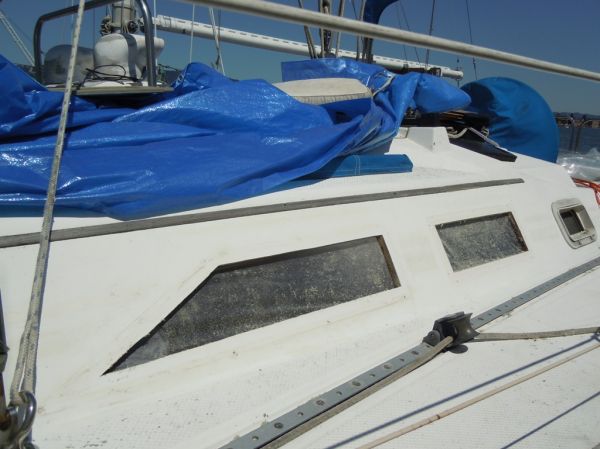 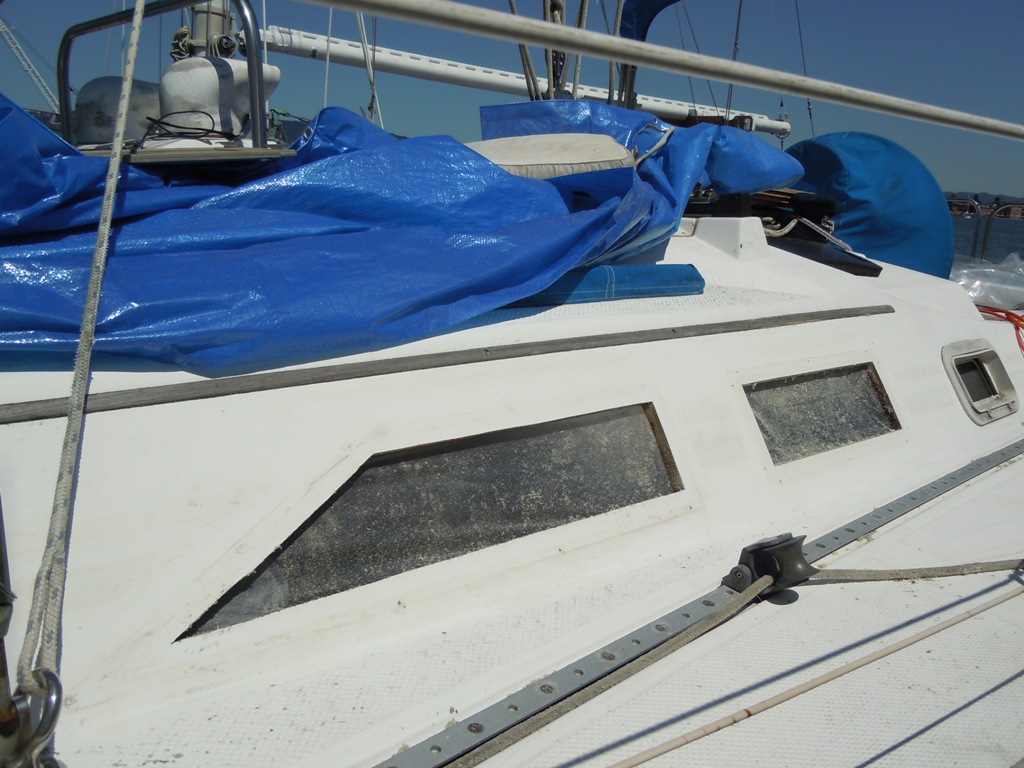 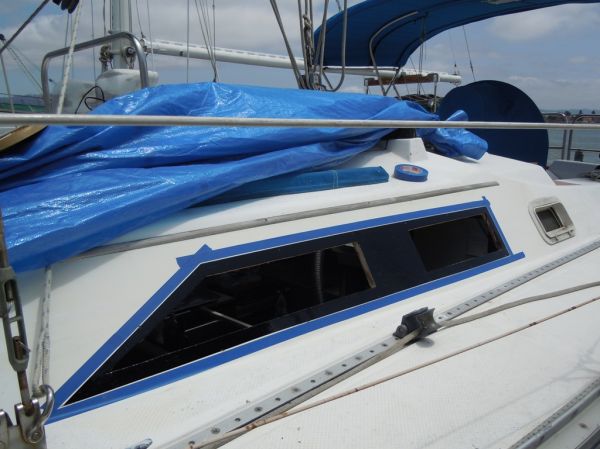 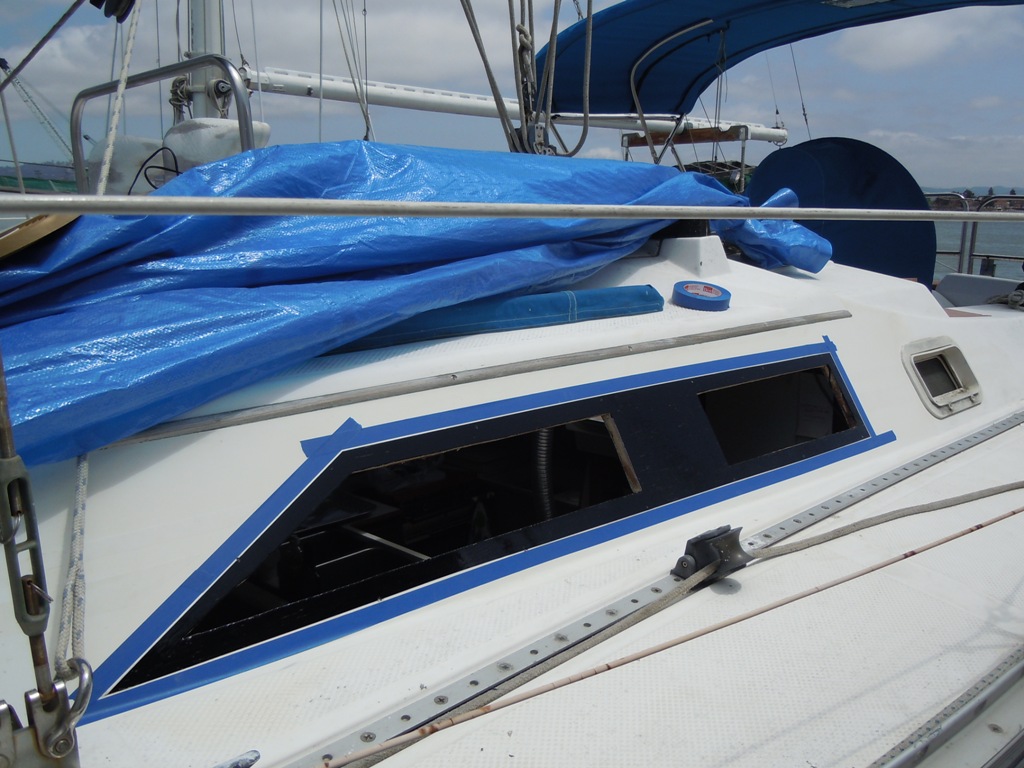 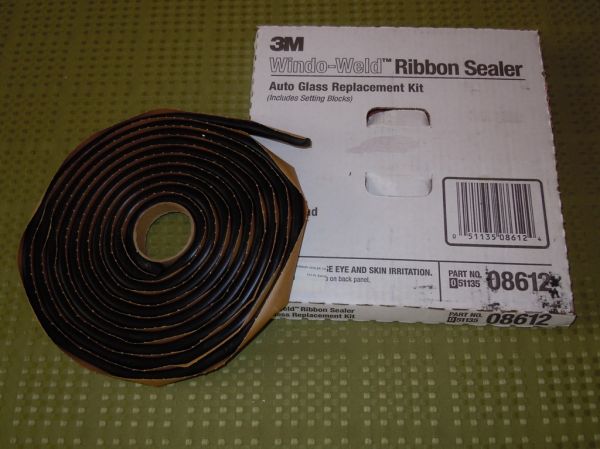 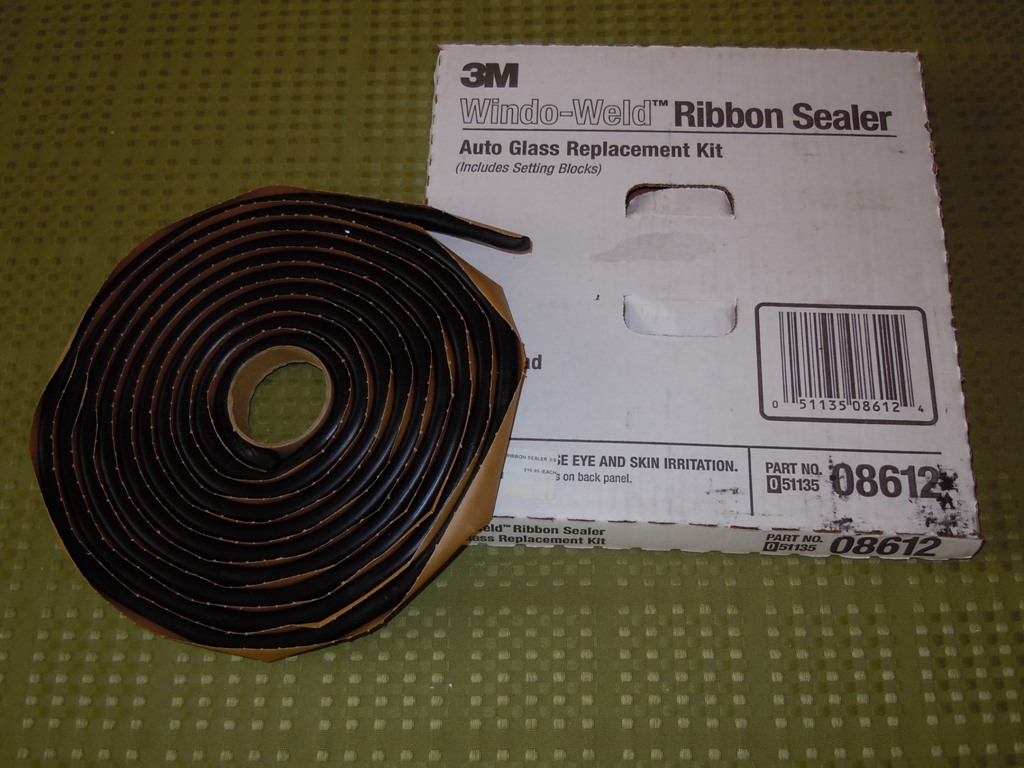 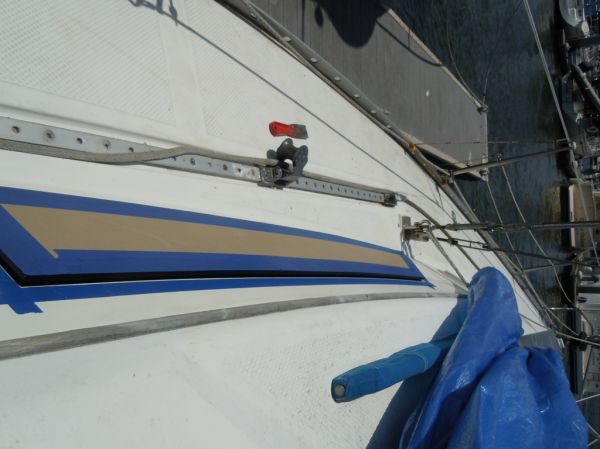 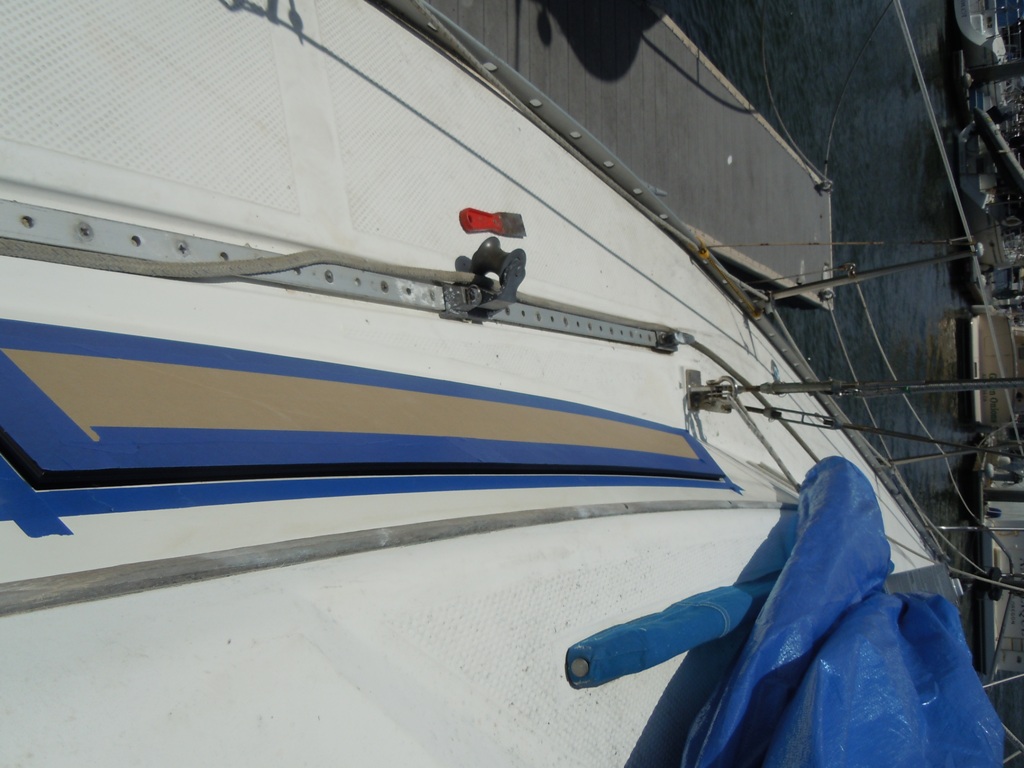 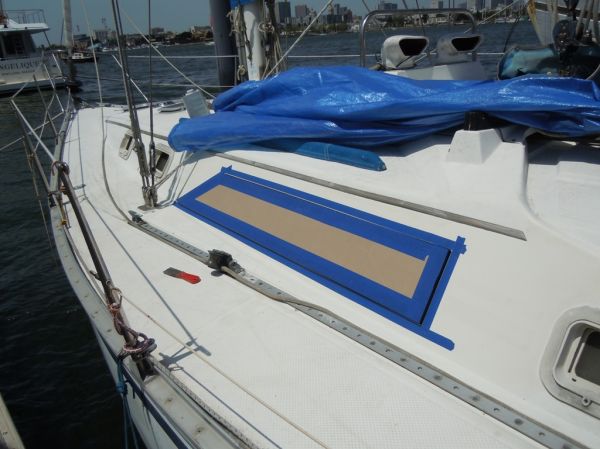 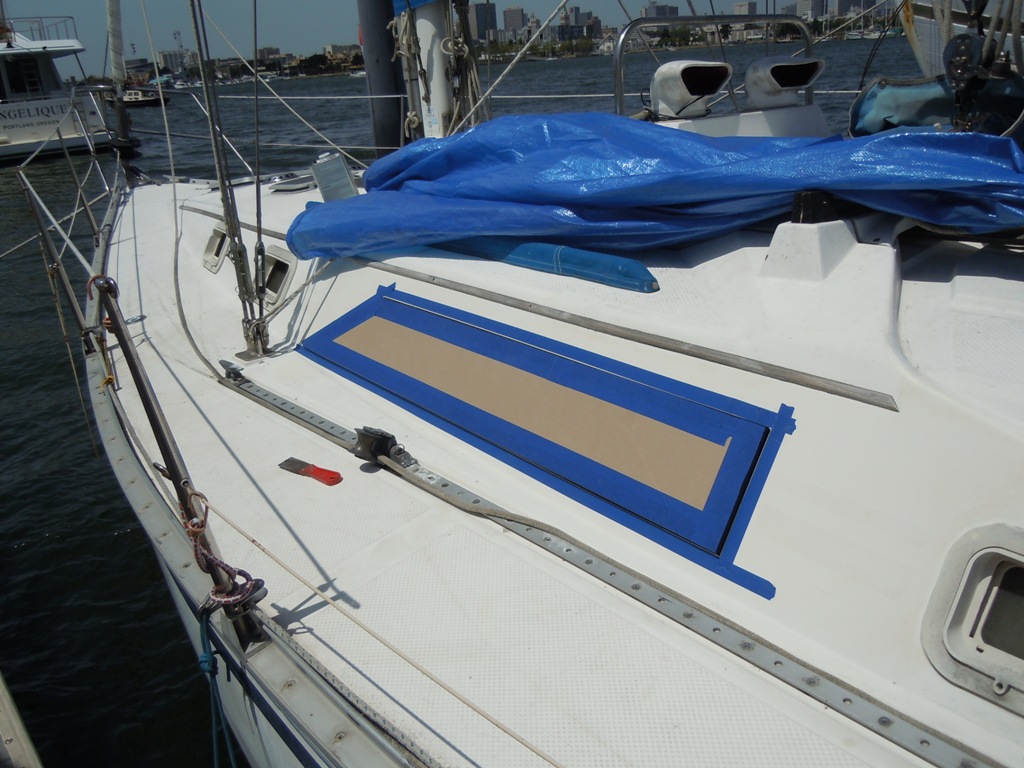 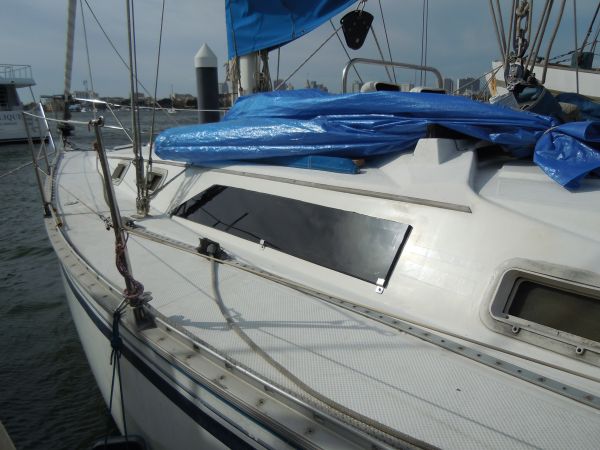 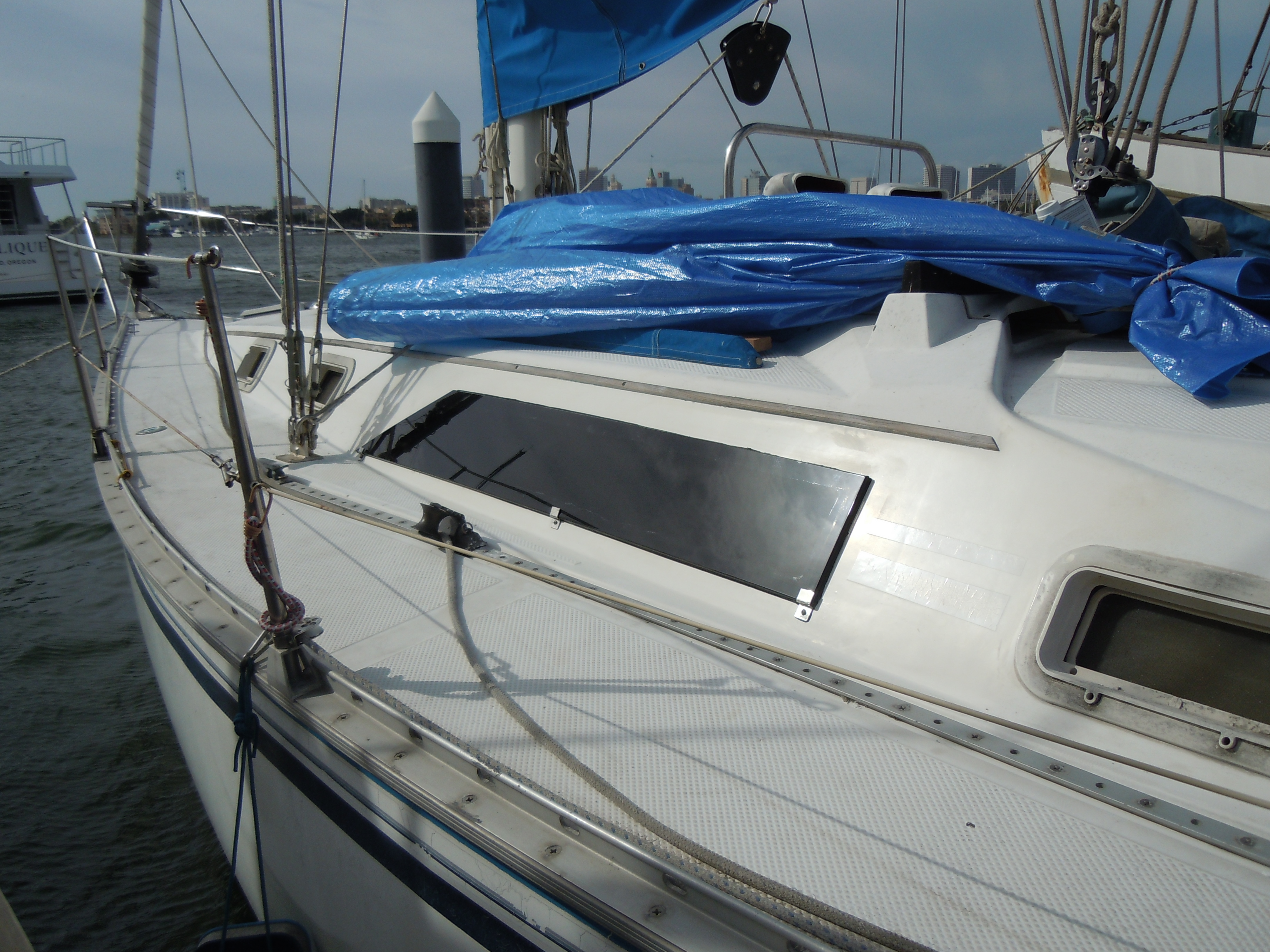 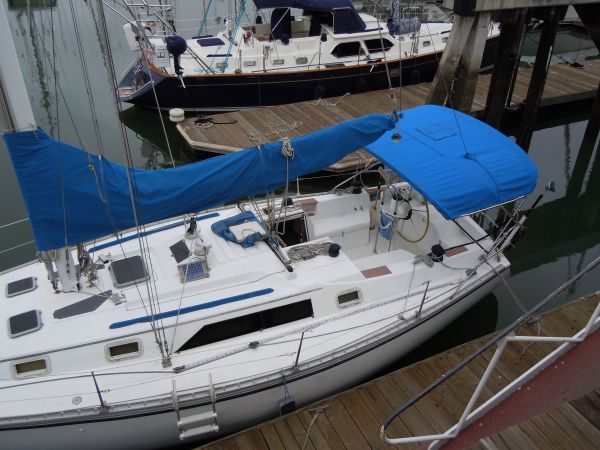 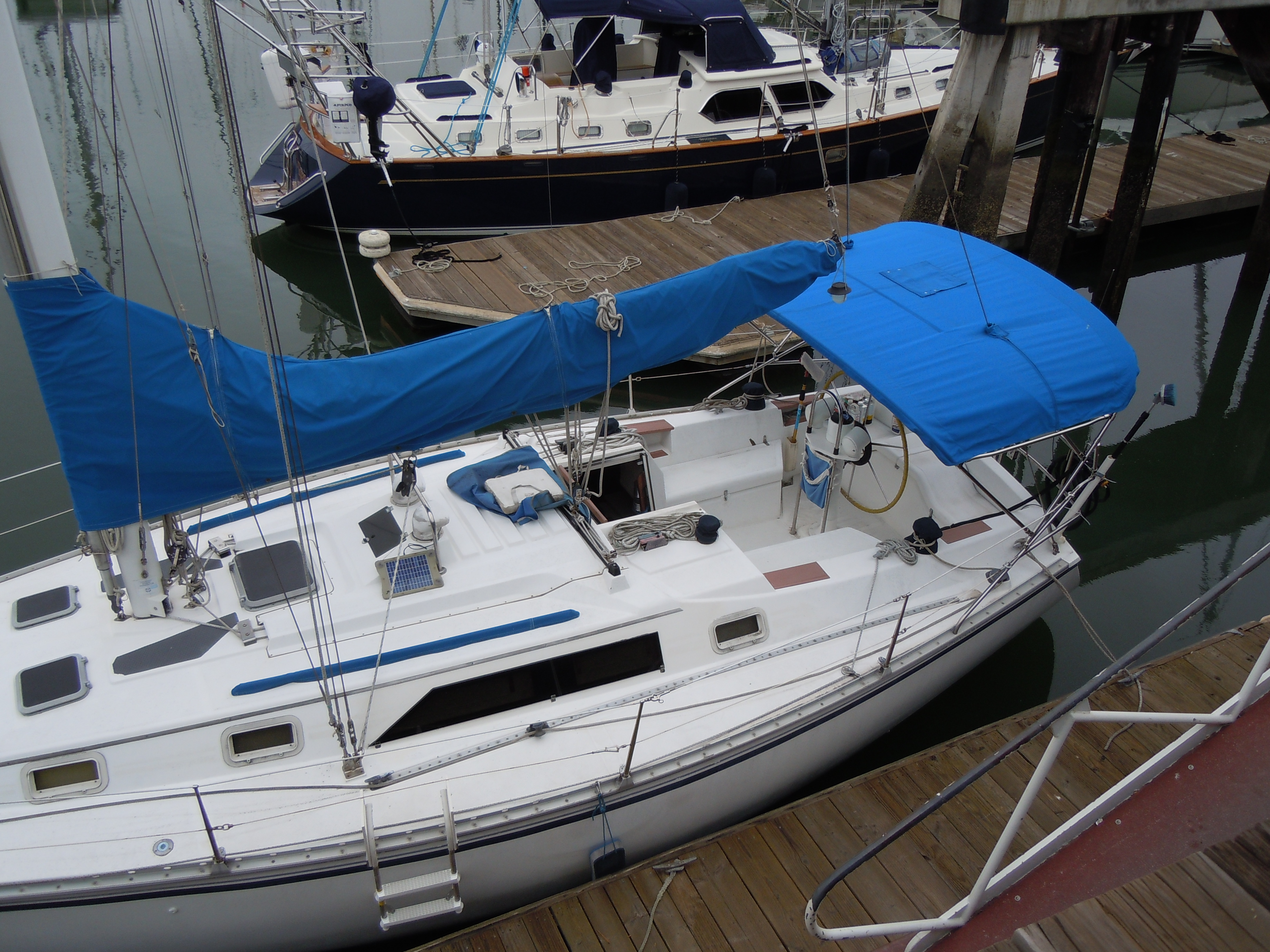 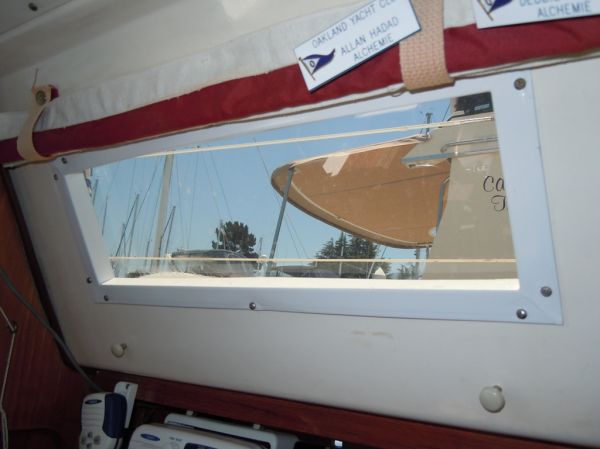 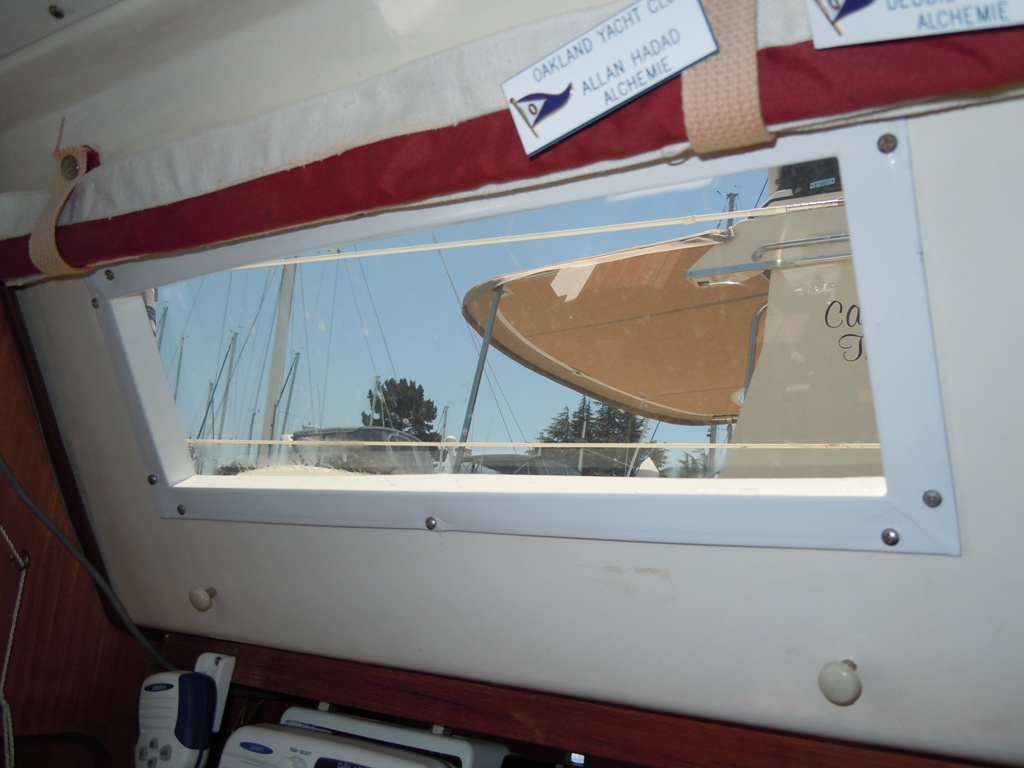